See previous common books, including information about the book, author biography, and PSCC projects relating to the book.

The Immortal Life of Henrietta Lacks 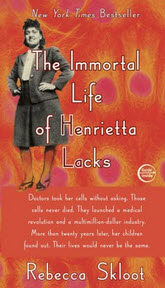 "Her name was Henrietta Lacks, but scientists know her as HeLa. She was a poor black tobacco farmer whose cells—taken without her knowledge in 1951—became one of the most important tools in medicine, vital for developing the polio vaccine, cloning, gene mapping, in vitro fertilization, and more. Henrietta’s cells have been bought and sold by the billions, yet she remains virtually unknown, and her family can’t afford health insurance."

"The Immortal Life of Henrietta Lacks tells a riveting story of the collision between ethics, race, and medicine; of scientific discovery and faith healing; and of a daughter consumed with questions about the mother she never knew. It’s a story inextricably connected to the dark history of experimentation on African Americans, the birth of bioethics, and the legal battles over whether we control the stuff we’re made of."

The book has won "several awards, including the 2010 Chicago Tribune Heartland Prize for Nonfiction, the 2010 Wellcome Trust Book Prize, and the American Association for the Advancement of Science’s Award for Excellence in Science Writing, the 2011 Audie Award for Best Non-Fiction Audiobook, and a Medical Journalists’ Association Open Book Award."

Trailer for The Immortal Life of Henrietta Lacks, from Rebecca Skloot's YouTube channel.

Common Book (n) - An innovative approach to orient new students to college. The Common Book gives students a reading experience to share with their peers at Pellissippi State.

Pellissippi State has a common reading experience for new students. Each year a new book is selected for this program. The intention is to stimulate a year-long discussion of issues related to the book, by encouraging exploration in classes, on and off campus, and with co-curricular programming. This common reading experience involves incoming first-year students, and many faculty and staff.