Common Book 2015-2016: The United States of Appalachia: How Southern Mountaineers Brought Independence, Culture, and Enlightenment to America: About the Book 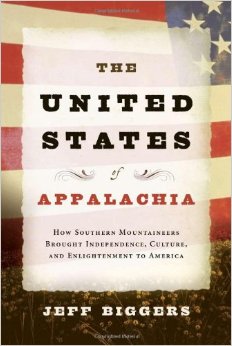 Appalachia has long been a vanguard region in the United States--a cradle of U.S. freedom and independence, and a hotbed for labor and civil rights movements and groundbreaking science, literature, and music. Far from being in the backwash of American history, Appalachia has produced some of our country's most important innovators. To name only a few: Cherokee inventor Sequoyah; Black History Month founder Carter Woodson; jazz and country music legends Bessie Smith, W.C. Handy, Nina Simone, and the Carter Family; New York Times Publisher Adolph Ochs; authors Pearl S. Buck, Thomas Wolfe, Edward Abbey, Cormac McCarthy, Henry Louis Gates, and Rebecca Harding Davis; and social activists John Rankin, Martin Delany, Myles Horton, and Walter Reuther. With humor, intelligence, and clarity, Jeff Biggers shows us that, to properly understand American history, it is essential to know the history of Appalachia.

“Jeff Biggers opens a new window on the complex history of the region called Appalachia. He takes a hard but affectionate look at both the myths and the facts, and what he finds is by turns sobering and thrilling. Drawing on the contradictions, layers, and range of what is known as mountain culture, he shows that nothing is quite what it seems, and that to understand American history it is essential to know Appalachian history. Biggers tells his story with verve and vivid detail, a story that will at once provoke and inspire.”—Robert Morgan, author of Boone, Gap Creek

Pellissippi State has a common reading experience for new students, and each year a new book is selected for this program. The intention is to stimulate a year-long discussion of issues related to the book by encouraging exploration in classes, on and off campus, and with co-curricular programming. This common reading experience involves incoming first-year students and many faculty and staff.

Common Book (n) - An innovative approach to orient new students to college. The Common Book gives students a reading experience to share with their peers at Pellissippi State.

The United States of Appalachi is available as print on all campuses and as eBook from anywhere.​