This years Common Book, An Illustrated Book of Bad Arguments, is a part of a project to teach people about the field of critical thinking. Designed originally for a young audience, this book uses comical images to portray common errors in reasoning. 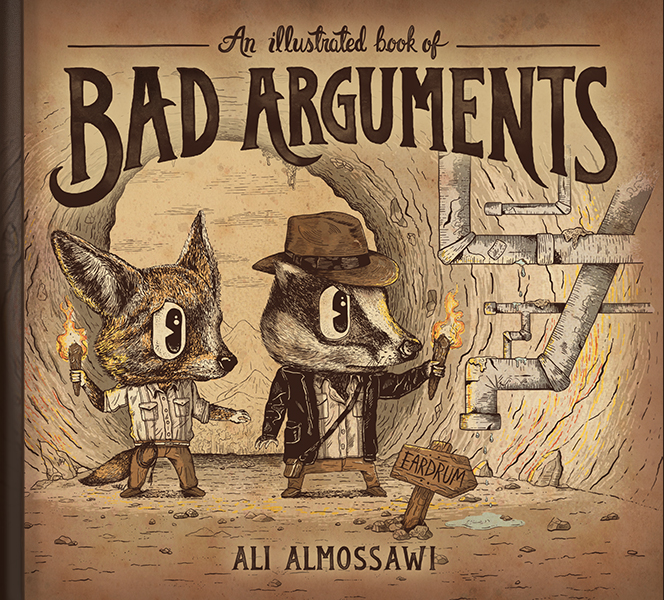 "I go on two solitary walks every day. There is a small park off the Embarcadero that is tucked away in a quiet spot. It has a pleasant stream flowing through it and an unassuming bench beside that stream. I have made walking to that frail bench a ritual, and the half an hour or so spent daydreaming on it amid the cool San Francisco breeze, an article of faith.

It was on a day in October of last year when, during one of those quiet moments on that bench, I recalled my college years and how outspoken I happened to be during them, an observation only made interesting by the fact that I have since turned into the quietest of beings. They say that achieving knowledge is a function of one's ability to manage both doubt and hubris. I don't know. I find that as the years go by, I am left with more of the former and less of the latter.

A realization that coincided with that nostalgic whiff was that a sizable amount of the discourse nowadays continues to be plagued with bad reasoning.

Hence, the idea that finally shook me into soberness was one that had been fermenting for a while. It was that of visualizing, in a simple manner, some of the principles that had helped me do so well in debates and in off-the-cuff arguments with colleagues. Simple. That would be the novelty of it. And so, with my two-year old daughter in the back of my mind, I decided that illustration would be an ideal language, given its universal appeal."

Pellissippi State has a common reading experience for new students. Each year a new book is selected for this program. The intention is to stimulate a year-long discussion of issues related to the book, by encouraging exploration in classes, on and off campus, and with co-curricular programming. This common reading experience involves incoming first-year students, and many faculty and staff.

Common Book (n) - An innovative approach to orient new students to college. The Common Book gives students a reading experience to share with their peers at Pellissippi State - A Common Academic Experience.